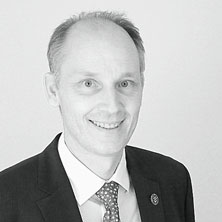 Dr. Felix Grasbon studied physics at the Ruprecht-Karls-University Heidelberg and at the University of Connecticut, U.S.A. He obtained his doctoral degree at the Max-Planck-Institute for Quantum Optics / Ludwig-Maximilians-University Munich with experiments on the phase-dependent interaction of ultra short laser pulses with matter. He already works since 2002 in the field of intellectual property. At first, he worked in the patent department of a big German company in the section relating to medical devices, then for three years in the New York office of a large U.S. American IP-Firm, and subsequently for ten years in a Munich based patent law firm. He became a European Patent Attorney in 2006, and he was registered as a U.S. Patent Agent in 2008 and as a German Patent Attorney in 2012. Since July 2019 he is partner of our law firm.

He enjoys his leisure time with his family, sports, and Alpine glider flying.